Speedway and Swan Poem Playlist for Episode 1, May 17, 2015, with guest co-host Jane Miller 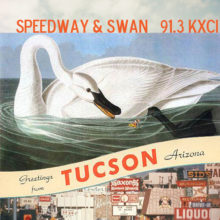 The first episode. With host Brian Blanchfield, poet Jane Miller brings some of her favorite poems, reflects on registers of tragedy in contemporary poetry, muses about the impact of Adrienne Rich, and speculates about a bull on a boat in the rain in a 19th century haiku. Musical selections include the Trio Esperanca, Kristen Hersh, and Bill Frisell.

“How hard is it raining?”

Masaoka shiki | Untitled haiku [“With a bull on board”], c. 1890. reprinted and translated by R.H. Blyth in Empire of Signs, by Roland Barthes, Hill and Wang.

Rachel Zucker | “The Meanest Thing I Ever Said,” The Pedestrians. Wave Books, 2014.

Christopher Davis | “Jojos’s,” The Tyrant of the Past and the Slave of the Future. Texas Tech University Press, 1989.

Adrienne Rich | “Diving Into the Wreck,” voca recording from January 1974, The University of Arizona Poetry Center.

Jennifer Moxley | “Dividend of the Social Opt Out,” The Open Secret. Flood Editions, 2015.

Brian Blanchfield is a poet and writer whose two books of poetry–Not Even Then and A Several World–have won him The James Laughlin Award, a Howard Foundation fellowship, and recognition as longlist finalist for the National Book Award. A poetry editor of Fence, he teaches creative writing at the University of Arizona and runs the downtown Tucson reading series Intermezzo.

Speedway and Swan Poem Playlist for Episode 1, May 17, 2015, with guest co-host Jane Miller