In this long crisis, it sometimes feels as if time has lost its meaning. Making a list, for example, of my favorite films of the year is much more difficult this time. Many pictures that were going to be released in 2020 were delayed, and so now, in addition to the 2021 films, there are the ones finally released from the year before. Too many good movies! Well, that’s a nice problem to have.
As always, I’m late because I like to wait until many of the year-end releases make it to my neck of the woods. Adding to the challenge is that my viewing has been almost exclusively through streaming platforms and not theaters. For Flicks, I used to make a distinction between films actually shown on screens in my city, and anything else. That distinction is now gone, and I’m glad.

The Works and Days (C.W. Winter & Anders Edström).
Here is a film in a category by itself. The full title is The Works and Days (of Tayoko Shiojiri in the Shiotani Basin). In eight hours, it covers a year in the life of an extended farm family and their neighbors in a mountain village of rural Japan. Tayoko is a central figure, who performs numerous chores on her little farm, while her husband who has fallen ill, likes to drink with his friends and watch matches of Go, the board game, on TV. Tayoko occasionally narrates from her diary, but the point of view is omniscient, and we follow a lot of people other than her. The picture is directed by an American and a Swede, which might seem odd for a Japanese film until you learn that Tayoko is Edström’s mother-in-law.

There’s a famous wisecrack that some film students may have heard: “If I wanted realism, I’d look out the window.” Well, this is the film that looks out the window, and it’s beautiful. In every frame, we see the everyday, and it’s all real in a sense that’s more pure than I can describe: the daily tasks, the natural world surrounding; conversations mostly casual but some meaningful. It’s not hermetic: this is modern Japan with cars and refrigerators and so forth, but it’s not at all like watching a story—this is to enter a stream of experience. The running time is an essential aspect. The long form allows this experience to unroll and simulate to a degree the awareness of reality. Of course this limits its audience, and that’s OK. I watched it, and was enraptured. 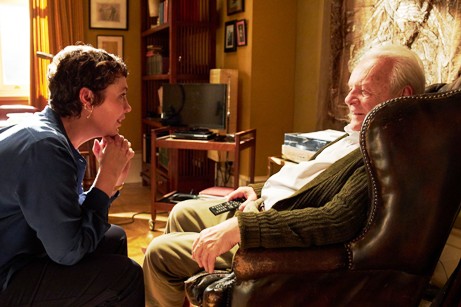 This is the story of a man, a father, gradually succumbing to dementia—a fairly common story, you might think, but the way the story is told is devastating. Through puzzling twists and turns in the story and dialogue, along with brilliant effects of scenery and perspective, the film depicts dementia from the sufferer’s point of view. The ingredient that makes it so powerful is Anthony Hopkins in the title role. He absolutely nails this part, conveying the anger, defiance, confusion, denial, fear, and helplessness of a man losing his way. The Father doesn’t condescend to pity, the style seeking to replicate instead the ruthlessness of the disease. The ending is utterly heartbreaking, just the same. Mangrove  (Steve McQueen).
This is the first film in McQueen’s epic collection Small Axe. It tells the true story of a restaurant called The Mangrove, a center for the West Indian community of London in the late ‘60s. The Mangrove and its owner are made the target of racist harassment by the London police, resulting in a trial in which black citizens of the U.K seek to assert their rights. McQueen conveys the sights, tastes, and sounds of his characters in a masterful portrait of resistance and resilience, in the most politically forceful fiction film of the year. The veteran Russian director dramatizes a little known episode in Soviet history: in 1962, a factory in southwest Russia went on strike for better working conditions and higher wages, marching on Party headquarters and totally surprising the authorities. We follow a woman, a hard-line minor official played by Yuliya Vysotskaya, whose own family gets caught up in the government crackdown, which puts her faith in the Soviet system to the ultimate test. Shot in black and white, it is a tragic account of what damage a dictatorship can do to the minds of its own people.

Azor (Andreas Fontana).
What does it take for a normal, civilized person to cooperate with evil? In a film of simmering tension and unspoken fear, we see how a Swiss banker serving the perpetrators of Argentina’s dirty war in the 1980s can justify his role simply by pretending he doesn’t see. We look for clues to what’s really going on in the most casual off-hand hints and statements by the denizens of an insulated upper class society. The political vision of Azor is stark and eerie in its portrayal of a society plunged in shadow, which cunningly hides the darkness with every word and gesture.

Anderson’s most playful live action film yet presents itself as an issue of the titular magazine, providing intriguing stories of French people and culture to American readers. The three main articles are in black-and-white, an innovation by which Anderson achieves his special kind of visual beauty without color. And set free by the anthology form, he can be as silly as he wants to be. The resulting humorous romp is delightful, with Adrien Brody and Jeffrey Wright the stand-outs in a good ensemble cast. Bergman Island (Mia Hansen-Løve).
A screenwriter couple (Vicky Krieps & Tim Roth) vacation in Fårö, where Ingmar Bergman famously lived, hoping that it will inspire them to finish their screenplays. Hansen-Løve has genuine respect for Bergman, even while exploring his artistic and personal flaws, and the movie itself is a kind of feminist counter-argument to the way men and women are depicted by Bergman. There’s also a lot of humor in the way tourism exploits Bergman’s legacy on his island. When the woman screenwriter describes her planned film to her partner, we get a film-within-a-film starring Mia Wasikowska. This is a smart and funny treat for cinephiles.

The Worst Person in the World (Joachim Trier).

We follow Julie, a young Norwegian woman played with intelligence and wit by Renate Reinsve, as she goes in and out of relationships, high on the initial stages of being “in love,” while trying to figure out her path in life at the same time. You might expect a romantic comedy, and the dialogue is sometimes quite funny, but the real story is how she keeps finding herself as a supporting player in the dramas of the men she’s with. Without making anyone a villain, Trier shows how unconscious cultural assumptions about sex and love leave women unfulfilled.

The Power of the Dog (Jane Campion).

Returning to feature directing after twelve years, Campion employs some of the iconography of the western, in this instance involving cattle ranching and cowboys in 1920s Montana, to puncture the inflated masculine imagery of toughness, and reveal the plain and ordinary meanness underneath. Playing against the mystique of the “bad guy” character so common in our fiction, the arrogant ranch boss, played brilliantly by Benedict Cumberbatch, is not in control of his story, or his feelings—but he thinks he is. In the end, strength comes from an unexpected corner.

The Rescue (E. Chai Vasarhelyi & Jimmy Chin).
The directors, who scored a big success a few years ago with the rock climbing doc Free Solo, must have jumped at the chance to cover this news event about a boys’ soccer team trapped in a flooded cave in Thailand in 2018, and the efforts to rescue them. The story itself is so amazing that I can only urge everyone to see the film without giving away anything more, except to say that actual diving footage is mixed with perfectly executed reenactments to show us every stage of the collective action in which people around the world pulled together to save some kids.

And in a year of too many good movies, the B-sides are very good too:

I hope 2022 sees a return to theaters, and I wish you all a safe and healthy cinematic year!